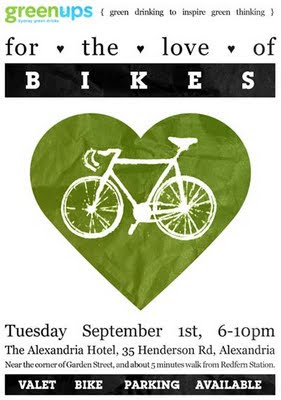 http://greenups.net/
Posted by MerJa Media at 2:25 pm No comments:

The Cycologists are a three man bicycle band from Australia fronted by acclaimed instrument maker Linsey Pollak and also featuring Ric Halstead and Brendan Hook. For their impromptu, outdoor live performances, the band ride up on their bikes and remove the seats in unison to reveal modified clarinets made entirely of bicycle parts. After they've finished performing, they take a bow before hopping back on their clarinets and riding off into the sunset. 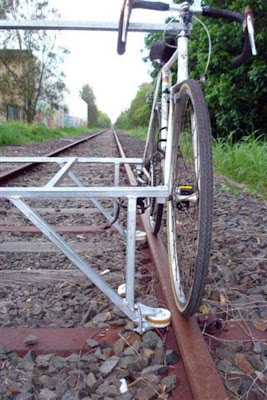 Two mates have found a novel way to make the most out of old rusting railway lines.

A few years ago Julio Mottola and Michael Albert hatched a plan to create a unique bike that could be ridden on rusting tracks.

The wheels then lock the bicycles to the railway tracks and away you go.

Secret and illegal trials of the prototype, on the disused Casino to Murwillumbah rail line on the NSW north coast, were a success.

"It's a very safe and simple design and it's very easy to use," Mr Mottola says.

"It requires less muscle work than riding a bicycle on the road because the tyres sit on top of the rails so there's very little friction."

It took the pedaling pair two-and-a-half hours to locoride from Mullumbimby to Byron Bay.

"It was quite exciting because the country is amazing," Mr Albert, who lives in Melbourne but visits Byron Bay regularly, said.

"And we did raise a few eyebrows when people spotted us."

Mr Albert says there is far more to their ambitious plans than just "skylarking"; The duo believes the locobike offers plenty of transport and tourism potential for the region.

And if all goes according to plan and their machine becomes legal to use on the tracks, they will hand over the locobike concept to the local council.

"It would be a real feather in the Byron district's cap" Mr Albert said.

"It could be a fantastic landmark of Byron Bay," Mr Mottola, who moved to the coastal town from Argentina eight years ago, said.

Both say inventing the locobike has nothing to do with finding fame and fortune.

"Nobody is going to make money," Mr Mottola said.

But lantana growing throughout the region has currently stopped the prototype locobike in its tracks.

"The lantana's very thick and the locobike, being very lightweight, just can't get through it on the tracks," Mr Albert said.

But the pair have a way to stamp out the "filthy weed".

"It dawned on us that the locobike is perfect to clear all the lantana," Mr Albert said.

"The locobike will carry a load and you could put a basket in the middle and put your gardening gear in that.

"It's got wonderful potential for land care as well as for community groups."

And if the locobike gets that final tick of approval, the pair reckon the sky's the limit for their device.

"There's potential for it everywhere, even in third-world countries where the trains don't work and they've got unused rail lines," Mr Albert said.

"You could even have honeymoon locobikes," he said.

Posted by MerJa Media at 5:50 pm No comments: